Yes, it is a beautiful day in the neighborhood... 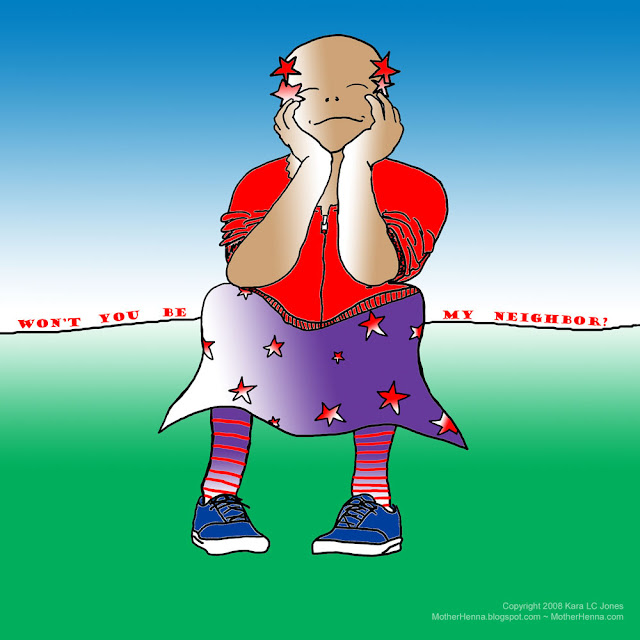 Yes, I did get the chance to actually work at the Neighborhood!

I know it's really easy to make jokes about the pace and tone of the Neighborhood shows and materials they offer -- especially in a world today that is so fast paced and technology based. But I spent several years studying Fred Rogers' work and if you just take the time to really look, you'll see some incredible things:

And even after his death, there are incredibly talented people who have worked with the Neighborhood from the start who are maintaining and nurturing the growth of all Fred's work. You can learn about their work at the The Fred Rogers Company.

So all the photos, I'm sharing today were taken by my mom who was equally excited about my working at the Neighborhood. :) 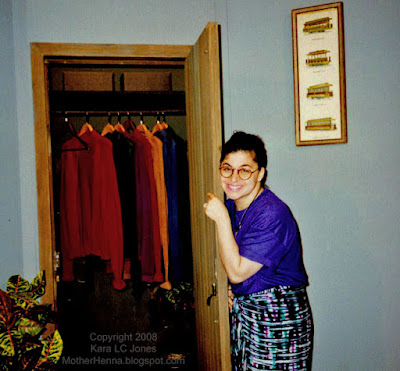 Photo left: The day my mom came on the set of studio A, we had the Neighborhood house set up. So she got to snap photos of me playing around on the set.

It simultaneously seems like a million years ago and just yesterday. During my three years at CMU in Pittsburgh, I was lucky enough to land an internship in PR and production at the Neighborhood under the mentorship of Hedda Sharapan. I got to work with David Newell (aka Mr. McFeely), Margy Whitmer on a few of the Let's Talk About It books, and doing some production assisting with Matt Meko, Adrienne Wehr, and Heather Arnet along the way. It was a most interesting time.

It's hard to explain how it was both thrilling and disillusioning to walk onto the set of the Neighborhood of Make Believe in studio A. It had always been an imaginary place. But here it was, brick and mortar, set artists touching up the painting of the path of rocks, the various puppets, seeing that Mister Rogers sneakers were actually a necessity in Make Believe because it was usually he, the one man, running from X the Owl's tree to behind the Castle to voice almost *all* the puppets himself! 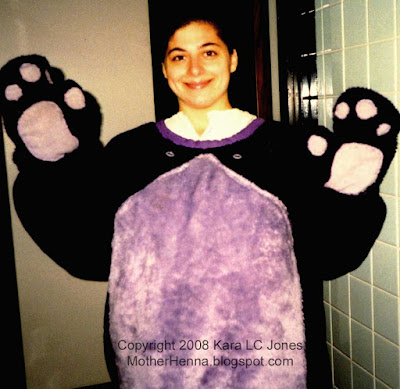 I did a lot of different things while working there. One of the big thrills was the chance to play the Purple Panda at a few live events with David Newell when he did appearances as Mr. McFeely. There have been many, many people over the years who have gotten to play Panda, the most famous of which is probably Michael Keaton.

When I was there, Matt Meko played the Panda on the set a few times for filming. I vaguely remember an episode of him dressed in this same Panda suit (photo left) but with the addition of roller skates -- or was it inline skates? I can't remember now. But I remember it being pretty hilarious.

And let me just say that all the layers of that costume were HOT! I remember laying the pieces of it around the office to air it out and dreading any hot, summer day events. Can't imagine what it must have been like to be under the head of it with the hot lights in the studio -- I should ask Matt about that :)

For my part as Panda it was only live appearances which was great because there were always kids around who just flipped out at seeing Panda. My mom snapped this photo at one of the ice cream socials -- yes, that's me under there :) 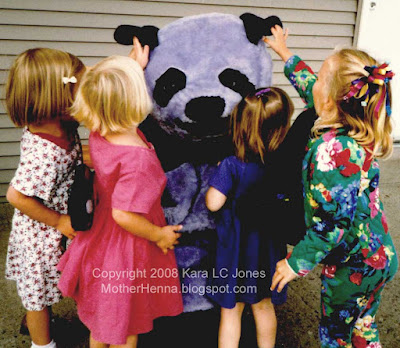 One of my favorite jobs at the Neighborhood was getting to write with Hedda and Fred. He had his very unique way of speaking and writing. It really was like learning a different language. He had an understanding of the internal life of kids -- of people in general really. His language reflected this. While I was there, my mom found a copy of a 1970's book the Blue Cross had put out in partnership with the Neighborhood, aimed at helping kids understand everyday things. I remembered having a copy of it when I was a kid, but my mom said I wore the book till it had holes in it, so it was gone by then. But she found a copy of it at a garage sale for a nickel and snagged it for me. It was so exciting to see it again that I brought it into the office the next week. Left it with a note for Fred in his office asking if he'd sign it for me. He left me a little note back saying it was exciting for him to see it again after all those years, too. 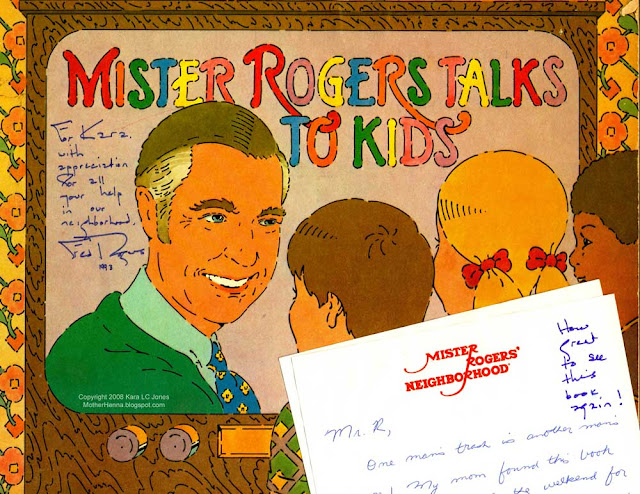 When I was working there, the Neighborhood had been in production for 25 years. They were no longer producing 52 new weeks of shows a year, but were doing only something like 5 or 6 new weeks of shows annually. But they were also in production for a zillion other projects like the photos books in the series "Let's Talk About It", filming specials like "Fred Rogers Heroes", and the "Different and The Same" series in collaboration with Susan Linn, and more. So there was a lot of time spent in the offices, at a desk, in front of a computer, on the phone, or at the copier. While I was always amazed that this was a company where people actually stood, looking you in the eye, waiting for an answer to the question, "How are you today?" -- there were also definitely boring office moments. Thankfully, there were creative sparks like Marissa and Matt in the office, too. They often pounced upon unsuspecting employees with a bucket full of confetti! Matt snapped this Polaroid the day the two of them got me: 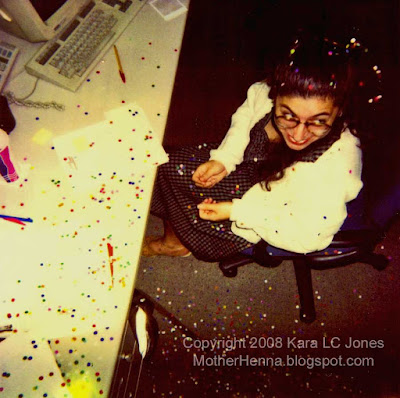 I will say that I loved when the Neighborhood shows were being filmed. Everything about being on the set, the Green Room, the jokes and play of the crew, the care and feeding of the fish :) Anyway, it was just fun to be a part of it -- and mom snapped this photo of me honoring the fish! 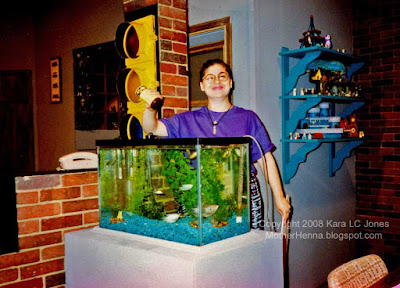 All in all, it was an interesting time in life for me. I had spent my childhood with the Neighborhood, and now here I was becoming an adult in the Neighborhood. There was so much to learn. Hedda was a great teacher. Long lasting friendships were made. Matt and Heather are still a part of my everyday life. And I think my mom and I were both touched to get to connect with Fred in person. I'm sure we were just another couple people on his radar since he met so many people every single day. But my life as an artist, woman, and human being was materially changed by being able to chat with Fred about the sacred space between the Neighborhood filming and the kids watching. I've thought often about that idea. The space between what I create and the viewer who sees it. That space is hallowed. It can be discounted and disregarded, overlooked. BUT when both artist and viewer are aware and conscious of that space, it is a place that allows for miraculous growth and development. And Fred was the one who taught me about sacred space. For that lesson, I will always be grateful. 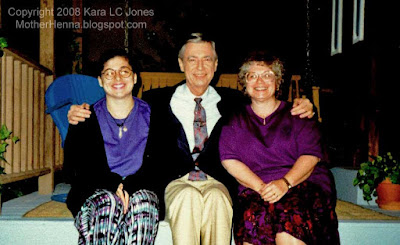 I don't know who took this last photo, maybe Matt or David. But that's moi, Fred, and my mom. It was such a luxury to get to spend that day with my mom on the set. I'm so glad I have these few snaps to mark its happening...

Anyway, that's my Neighborhood story!
Miracles to each of you!
k-