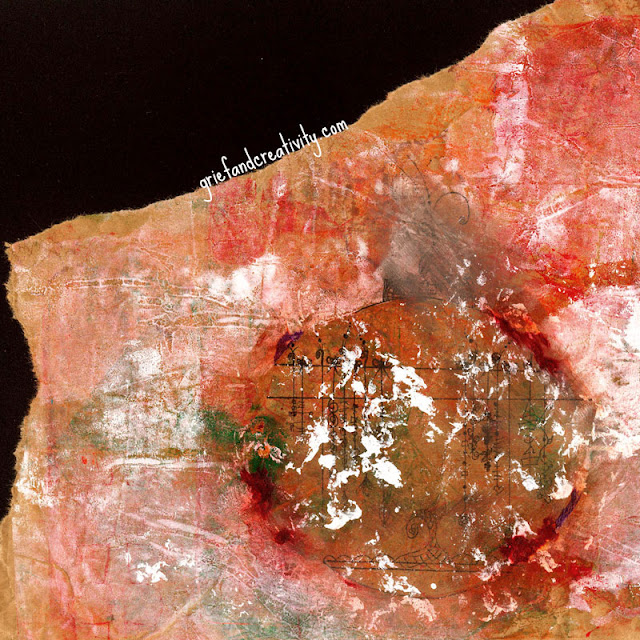 It is incredibly frustrating to see individuals, and our society as a whole, having impossible expectations around grief experiences. Today's share comes partly out of this rant I originally shared on one of my social media feeds, and it is worth repeating here to start us off:

Oh for the love of Pete!!!!! ARRRRG. Listen up, peoples. You cannot ever know more than the oppressed person themselves about what they need to find their liberation. This goes for social justice issues as well as for grief experiences!!!!!! If you actually think you have the right to tell another person they "need help" or "should get over it" or "need to find closure" or are "too sad" -- fuck you. You have internalized white supremacist imperialist capitalist patriarchy and are playing "father knows best" instead of being compassionate and present to a person who is already fucking hurting. Take your colonization bullshit and go play in your own yard. Hurting people need relationships that are partnering, curious, supportive. They do not need your prescription of propaganda for "the right way to do grief and healing" bullshit!!!!!!!!! ARG. [Have I mentioned my ability to be patient is challenged lately? ;P ]

Couple of years ago, I took one of Patti Digh's Verb Tribe courses. The creative approach that had the most lasting impact on me was her insistence that we write our different topics each day using a sharpie pen on a paper bag. Her idea behind it was that if we get all caught up in the "preciousness" of "good" pens and "quality" paper and such, we set ourselves up to have to be "perfect" and have what we created using those things be exceptional. But if we are writing on any old paper bag with whatever pen we have handy, it can get us in the habit of just writing to practice writing, to watch the words drip out of our fingertips, to let them move across a surface without them being so precious as to have to be perfect.

In the end, some of the things I wrote on the bags were gems. Some were starts that evolved into other pieces as I played with them. Some really were just trash that became bags used to ripen avocado or interesting surfaces to use as collage backgrounds on art pieces or something.

All of it was a reminder that if we want to be writers, then write. It's kind of like some of the sparks that Barb Sher has written throughout her different books about how if we want "to be" something, just start being it and see what happens. Now, of course, in a practical way, she wasn't advocating anything ridiculous like wanting to be violent, so start walking around with a gun!! But she was saying that for many things, you don't have to have a license or particular degree to just start doing it. If you want to be a writer, start a blog and write. Open a notebook and write. When someone asks what you do, answer with, "I'm a writer."

These things revolved around permissions that I had to practice giving myself. Maybe it is because I'm a girl/woman. Maybe it was some moral thing about "telling lies" from the religion I was raised with back in the day. Maybe it was individual internalized crap, maybe it was imposed from structural inequities, maybe both. Maybe maybe maybe. But for some reason, until encountering these kinds of practices with permission for myself, I kept looking for permission to call myself thus-and-such from someone else.

As a college student, I met a musician after a gig one night, and he asked about my studies. I told him I was a student of a particular professor, and the musician (who knew of this professor) said, "Oh you are a writer then. Great. What do you write?" It took me a moment to answer him because I was shocked. I hadn't yet allowed myself to call myself a writer "officially" or anything, let alone hearing it come out of someone else's mouth! Why did it make such a difference to have his validation? Why did I need that? Why did it shock me? And on and on.

Anyway, all this babble to say I keep re-discovering every single day that the value of practice is in the practice, not in the quality of the paper or pen. I want to be a writer, so I write. I want to be an artist, so I make art. I want to be a gardener, so I drop seeds into the dirt. Live it. Go for it. Take out that stack of paper bags and make art. And by the way, the muted mandala/gelli press art you see in the photo with this post is done, yes indeed, on a ripped up paper bag!!

This phrase: don't throw away your life. Or the idea where social injustices occur and we humans ignore it as if the people affected are just living lives that are disposable: throw away lives.

The amount of grief in those phrases makes me buckle under the truth that these are not just words. Rather, we are talking about human beings here.

I can understand we care about another.

I can't understand how we don't care about each other.

To look at the justice system or the water system in the good old USofA and throw up your hands and say, "Oh well, nothing I can do," seems like a defeated acceptance of the idea that people are disposable. Or to keep doing exactly what we are doing because "that's just how it is," seems like a collusion with the idea that some are just living throw away lives. Not saying we can be the solution, solo, ourselves, BUT we can DO something. When I am called for jury duty, I can go into the courtroom and when asked questions in voir dire, I can speak the truth. They'll never want me for any jury probably and the judge might threaten to have me arrested, BUT I can still speak the truth. I may not be able to change the pipes in places like Flint, but I can keep sharing on social media about the situation. I can sign petitions. I can donate money. I can protest visibly in the world, on the street when possible.

While the idea of using tossed away paper or disposable paper bags for writing, for not making writing process too precious, makes sense to me; the idea of LIVES being disposable makes no sense to me. We may make mis-takes (missed takes, like in the movies, so do another take). BUT we don't throw away our lives if we major in art or inter-marry religiously or racially. We have big social justice issues in the world, and while we individually can't fix the big picture, the people affected most by these issues are not lives we can throw away! There is action to be taken. Do something. Start by LISTENING to the people most affected!

The oppression of grief around these ideas is relieved some for me by taking action.
What does it for you?

More than ever, I hold close to my heart, the idea that it takes creative approach and practice to address our grief experiences and remain in touch with our humanness; our vulnerability; our (maybe broken) open hearts.

None of us can meet impossible expectations. We can only live our lives as practice. Make mis-takes (missed-takes), try again, keep experimenting. I have no answers beyond that. There are no such thing as "experts," but rather just people who are practicing practicing. And after all their practice, they know what works for them and are open to sharing BUT that should just be an invitation for you to practice and find your own ways. Their ways can't possibly be 100% yours, too. That's okay.

Don't have some sweet, wind-it-up, conclusion here. The swimming-ness flow of all these thoughts is all I have to offer as a reflection of my own grief + creativity. May Reiki flow to any and all eyeballs who come across this.
Kara